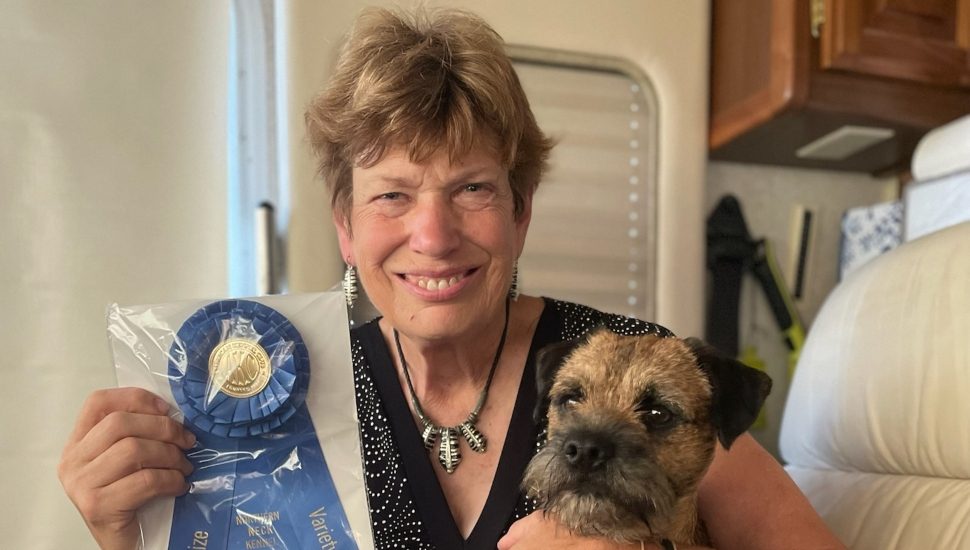 Like hundreds of dog owner-handlers who navigated last year’s pared-down National Dog Show Sponsored by Purina, Margery Good of Cochranville is relieved that the 2021 edition next weekend (Nov. 20-21) will look and feel a little more normal.

She’s eager — as are dog show professionals and fans alike — for the vaccinated public to again be permitted into the massive Greater Philadelphia Expo Center, Oaks. And for those unable to make it to the live competition, to watch the televised NBC coverage following the Thanksgiving parade.

“The National Dog Show is a wonderful event that brings awareness of our sport to millions in the general public on Thanksgiving Day,” Good said. “It’s great for dog shows and for purebred dogs in general because it makes people aware of what we do in this world of ours.”

Good has been competing with dogs since her childhood.

She grew up in Prince George’s County, Md., and became involved in a regional obedience club as a youngster with her German Shepherd. Her parents were not keen on the idea of their daughter in a show ring as a preteen. But Good was determined.

She wanted tangible recognition of the obedience work she accomplished with her German Shepherd. And she knew that showing under the watchful eye of an AKC-certified judge was the way to get it.

Her parents finally agreed, and Good launched her dog-showing career as a teenager in the 1960s.

After graduating from Earlham College in Indiana in 1974, Good moved to Chester County and opened Goodspice Kennels in 1980, providing grooming and boarding services for dog owners.

She continued to show, migrating from a German Shepherd to a terrier and transitioning from the obedience ring to the breed ring.

Over the years, she has taken her terriers (one of America’s most popular breeds) onto titles from champion to grand champions to Best in Show. She works over 150 different shows annually.

A major presence at the nearby Montgomery County Kennel Club Terrier Show every year, Good hit the peak of her career with the top-winning Sealyham Terrier of all time.

Still an iconic name in dog show circles, “Charmin” was bred by Good’s friend, France Bergeron, and won 95 Best in Shows, including at the prestigious Crufts Show in Great Britain in 2009.

In 2007 and 2008, Charmin was arguably the most famous show dog in the world and among the winningest show dogs in history.

The Kennel Club of Philadelphia

Good became a regular entrant at the National Dog Shows hosted by the Kennel Club of Philadelphia.

Her year-over-year perspective heightens the excitement of inviting back the public — even with caveats in place — to this historic show in the club’s lineage.

“We’re so used to being shoulder to shoulder with other competitors and spectators,” she said, summoning the vibe of shows past. “Usually, we have difficulty getting from one ring to another because the crowds are so large.

“We look forward to having spectators back this year and we appreciate the vaccinated-only policy,” Good continued. “It’ll be another great show and we look forward to everything being back to normal in 2022.”

At this year’s event, with spectators ramping up the excitement, Good will be showing about 20 dogs. Her field of 2021 competitors includes:

She’ll be working mostly with dogs owned by friends/clients from Southeastern Pa. Her pack includes neighborhood canines that are pets napping on a sofa one day and engaged competitors in the show ring the next.

More information on the 2021 National Dog Show, including all vaccination documentation requirements and ticket prices, is online.

Laura Corbett is a senior at the University of Delaware interning at Vizion Group Public Relations and is from West Chester, Pa. Her favorite dog is her cousin’s Cavachon, Charlie. More about him and her are at Laura’s blog.