Manor College to Host Next Installment of Ukraine Dialogue Series 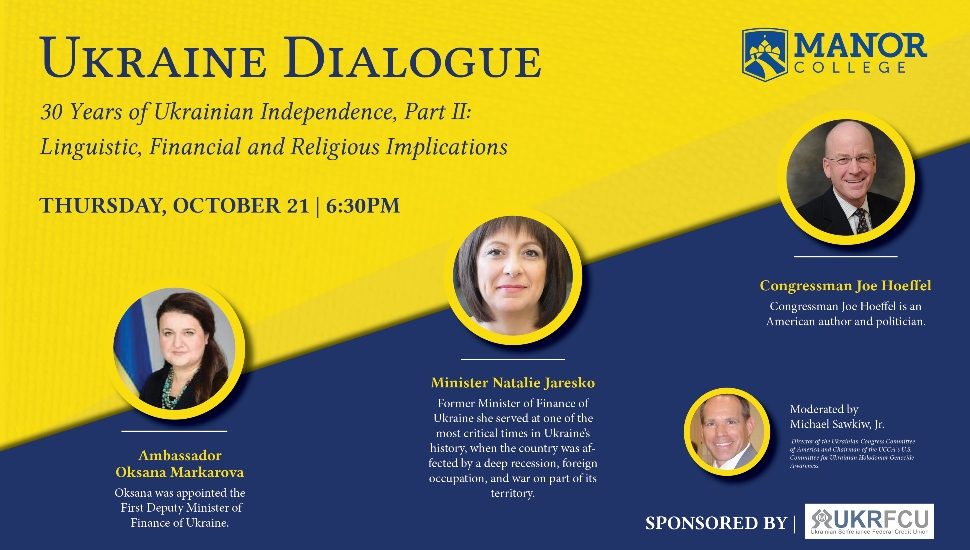 Manor College is pleased to host the next Ukraine Dialogue series, 30 Years of Ukrainian Independence – Linguistic, Financial, and Religious Implications.

Maragova started as the First Deputy Minister of Finance of Ukraine and became the government’s entitled representative for investments in Ukraine.

Jaresko has a distinguished international career in public service and the private industry, with over 25 years of successful management experience in strategy and negotiation development and implementation of public policy and business objectives, especially during crisis periods.

She served as Minister of Finance of Ukraine from 2014 to 2016 and served during a time when the country was affected by a deep recession, foreign occupation, and war.

Hoffel was a member of the United States House of Representatives from 1999 to 2005, representing Pennsylvania’s 13th Congressional District. During his time in government, he sponsored legislation regarding Ukraine and efforts to support the country.

The moderator for the event is Michael Sawkiw, Jr. Sawkiw is the Director of the Ukrainian Congress Committee of America and Chairman of the UCCA’s U.S. Committee for Ukrainian Holodomor Genocide Awareness.

The series is sponsored by the Ukrainian Selfreliance Federal Credit Union, a longtime friend, and sponsor of these programs at Manor College. The Ukraine Dialogue is a public, virtual event and open to everyone and takes place on October 21, 2021, at 6:30 p.m.

Register for free here to receive the Zoom link to the event.