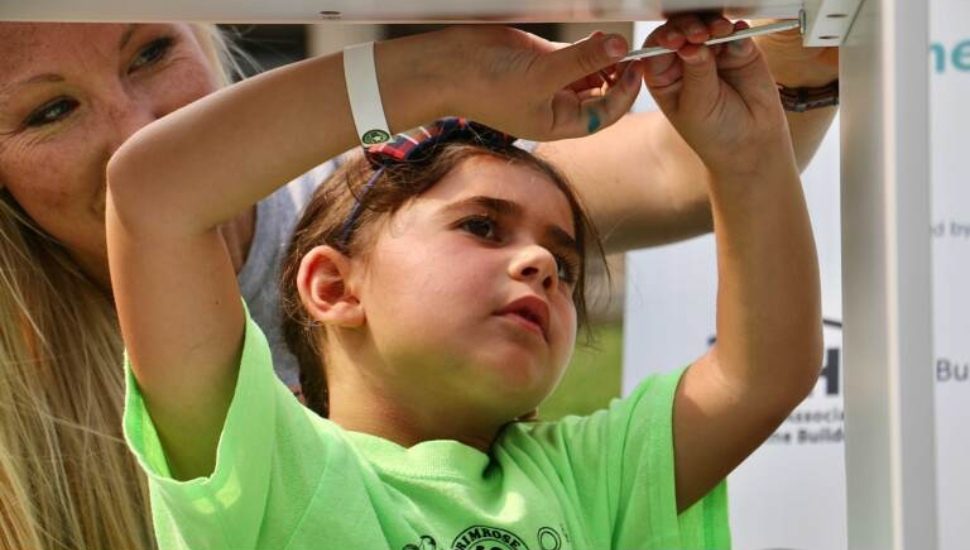 Image and caption via WHYY.
Zoey Gerson, 4, assembles a house-shaped bookcase with the help of general contractor Kristi Allen, who is the inspiration for the children’s book, ‘’The House That She Built.’

Despite messages parents may share with their own children about the ability to be anything you want, what is depicted by other parts of the world doesn’t always show that.

Plenty of children still assume certain jobs correspond to a person’s gender, which may deter them from aspiring for such a career.

A boy who sees only female nurses might assume that’s a job just for women. And a girl who is only seeing male construction workers might never dream of building anything.

In writing for WHYY, Peter Crimmins discusses how Philadelphia author Mollie Elkman is combating such stereotypes with her new book “The House That She Built.”

In explaining why she felt this story was important to tell, Elkman said, “We believe that career-based bias actually starts at an extremely young age. If we don’t have labor to supply housing, that’s a real problem. We really feel that that starts with changing the conversation with the youngest learners.”

To put what she writes into practice, Elkman recently met with a group of young boys and girls to read her book on the front lawn of the Smith Memorial Playground in Fairmount Park. After hearing the story of how a group of women all constructed a house together, the kids got to put what they had heard into practice.

With the help and supervision of female contractor Kristi Allen, all the kids constructed a challenging bookcase in the shape of a house. The group was given firsthand experience seeing it is totally normal for both boys and girls to be builders.

And as for Elkman’s book, it was already sold out on the day of its release thanks to presales. So many more children are undoubtedly hearing her message.

To learn more about “The House That She Built” and its message for children, read WHYY’s article by clicking here.

Career Corner: The Best Paying Jobs You Can Get in Philadelphia with a Bachelor’s Degree

Career Corner: Treasury Secretary Janet Yellen Shares Why Success is Doing Both What You Love and Hate

Career Corner: How to Take Smart Risks to Advance Your Career