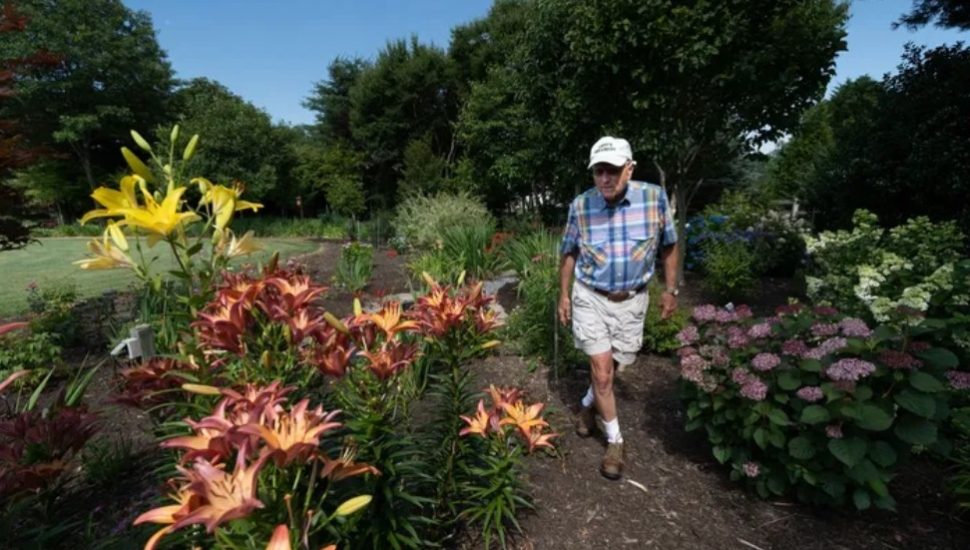 Image via Jessica Griffin, Philadelphia Inquirer.
Gary Erb in his Downingtown garden, transplanted and augmented from his former home in West Chester.

When they moved from West Chester to Downingtown, retirees Gary and Susan Erb took more than their furniture and closet contents. They transported their entire garden, writes Sally Downey for The Philadelphia Inquirer.

“We were spending more time at home and wanted more space to garden,” said Susan.

Before moving, the pair dug up 399 plants and shrubs from their half-acre, over-planted yard and hauled them to their new home with its two-acre plot.

Gary transplanted the flora and augmented it significantly to create a woodland garden. The space now brims with bright flowers and leaf colors that change from early spring to late fall.

The pair enjoys the sight of their hydrangeas, three varieties of lilies, and feathery astilbes, among many more, throughout the warm months. The rich garden’s vibrant colors also attracts many birds. As a result, it has been certified a Wildlife Habitat by the National Wildlife Federation.

Susan also grows some fruit and vegetables, but mostly for the fun of it.

And while some of the greenery had to be protected from the eager wildlife by mesh cages, most of it stands unobstructed.

Read more about the couple in The Philadelphia Inquirer.

For Local Tween, the 'Butterfly Effect' Is Something to Embrace, Not Fear