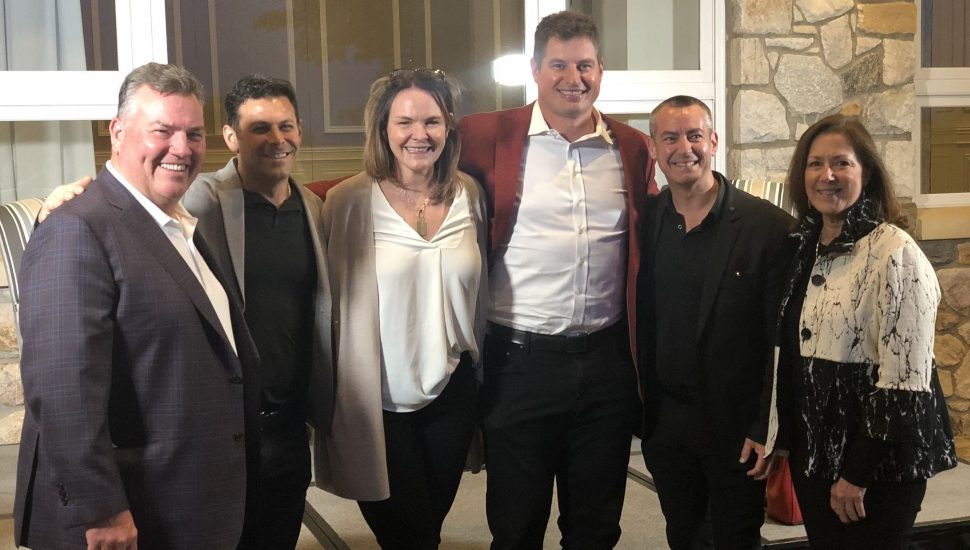 Image via Meridian Bank.
Former Eagles tight end and Super Bowl champion Brent Celek (center) now runs a real estate business and is a client of Meridian Bank. He is pictured with board members of the Entrepreneurs' Forum of Greater Philadelphia.

It didn’t hurt his business career, either.

Celek spoke of his post-football real estate business at an Entrepreneurs’ Forum of Greater Philadelphia event.

Celek grew up in a household of go-getters. His grandfather and father were in housing design/construction. His mother owned hair salons.

“That was very instrumental in making me want to become an entrepreneur,” Celek said. “It was always my dream to lead my own company; be that voice of reason, that person inside the business doing the right thing.”

After Celek’s impressive high school and college football careers, the NFL came calling. The Eagles drafted him in 2007, and he remained a Bird for the next 11 seasons.

But he was a realist. Celek knew he couldn’t play forever. His post-football aspirations harkened back to that itch to own a business.

“An average NFL career is about three years,” he said. “A second career outside of sports was always in the back of my mind. I mean, a player is always just a knee injury away from being out in the real world and working a different job.”

Celek’s first foray was a restaurant. It didn’t pan out. Issues included his naivete, which trapped him in a disadvantageous lease.

“When I signed that bad lease, I realized that I wanted to sit on the other side of the table” Celek said. “I didn’t want to be in a situation where somebody else controlled my destiny. So, that’s kind of what led me into real estate.”

“It’s a great industry for the bank,” Annas said. “You get to talk to all the smart people and watch and help budding entrepreneurs. And you gain a little bit of knowledge along the way on what to do and what not to do as a financial institution.”

Celek’s gradual migration from the gridiron to real estate began while he was still a player. He launched single-family home developments, with construction finance from Meridian.

“I learned a lot about risk, return, development, and how hard that is,” he said. “Ultimately, I fell in love with the sales side of the business.”

As his real-estate acumen developed, he expanded his reach. Ownership of a brokerage firm and a title company followed. Celek would like to continue evolving, undertaking single-family home design and development.

“I will say this about Chris and Meridian Bank,” Celek said. “The culture is amazing. What they do is awesome. People ask me ‘What is business culture?’ And I answer: If the people here for you today are the same people who will be there for you in 10 years, that’s business culture. And Chris has got that over at Meridian.”

The evening would not have been complete without a discussion of the Eagles’ Super Bowl win.

Celek put the win in the context of his entire 11 years in Philadelphia. Especially his arrival.

“I came into the Philadelphia locker room, and there was Brian Dawkins … and (Brian) Westbrook, and (Donovan) McNabb, and Tra Thomas and Jon Runyan … ”

Celek learned much from these leaders.

“I thought, ‘What do these guys respect?’ And there’s only one thing: the grind,” he said. “Who goes out there every single day and gives it everything they’ve got for that man next to him?”

Celek adopted that strategy — grind it out — for the rest of his time as an Eagle.

“In some cases, I just kept my mouth shut, just worked as hard as I possibly could every single day,” he said. “If I was hurting, I still tried to find a way to get out there. I wanted to be that guy who was a positive voice. I decided to give my all. Be super-positive to everybody. And hopefully, something good comes out of it.”

Indeed, as the capper to the 2017 Eagles season, something good did.

“We talked about in the days leading up to the Super Bowl,” he said. “We knew the only way we can become a family forever is to win this game. There was only one option.”

Learn more about the Entrepreneurs’ Forum of Greater Philadelphia.

Think You Can Recognize a Phone Scammer? Think Again