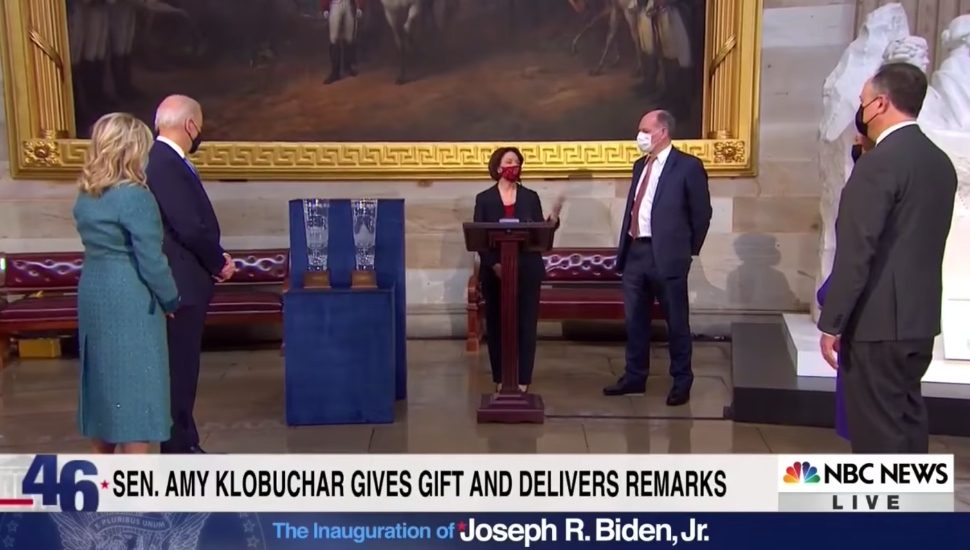 Image via NBC News video.
Two crystal vases created by Bristol-based Lenox were among the first gifts presented to President Biden and Vice President Harris after the inauguration.

The president’s vase features an image of the White House, while the vice president’s has an illustration of the Capitol.

“Both vases feature deep cutting and polishing techniques and are crafted entirely by hand in Pennsylvania by master craftsman, Peter O’Rourke,” stated the company.

O’Rourke worked with Lenox’s Chief Creative Officer Fawn Ostriak and her team to create the vases.

“Lenox has crafted a beautiful gift that perfectly encapsulates this historic tradition,” said U.S. Sen. Roy Blunt, chairman of the Joint Congressional Committee for Inaugural Ceremonies, which approved the design for the vases.

This is the ninth inauguration in a row that Lenox has created gifts for presidents and vice presidents. The tradition was established in 1989 at the inauguration of President George H.W. Bush.

“And this year we are especially proud to produce the Inaugural Commemorative Gift for the president and the very first female vice president of the United States of America,” said Lenox CEO Mads Ryder.